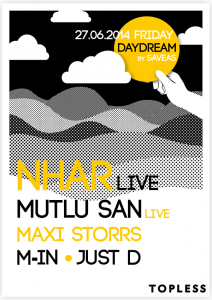 “The drummer is the second most fucked member of a band” according to a Doeller & Satter poster. Drummers among you may verify or not, but Bernard Siefer alias Nhar proved already his talent for rhythm with playing the drums for his youth metal band until he was 17.

Heavily influenced by the rave scene in Southern France with renowned events as Dragon Ball and Boréalis in the ‘90s, he could not resist to the energy of electronic music and started to collaborate with Kevin Scherschel for their 2004 debut release “Rikarbiere” under the moniker 22 Crew on Modélisme Records and one year later at Dirt Crew Recordings with “Egal” including Parisian Jennifer Cardini.

In the mid ‘00s, Nhar played a significant role at the second wind of Southern France’s rave scene with being Montpellier’s milestone after hour club Bar Live’s resident where he outlined his musical vision that he recalls as “BarLive’s surrounding brought about some change in my mixing style. There, I realised thanks to club music, I was able to convey more than rhythm, a real emotion”.

Nhar’s signature deep, hypnotic Techno with spectral voices characterised a string of releases at Mobilee, Time Has Changed, Modélisme, 200, Correspondant and recently at Canadian My Favorite Robot. His list of remix duties include respected artists as Silicone Soul, Pablo Bolivar, James Teej and many more.