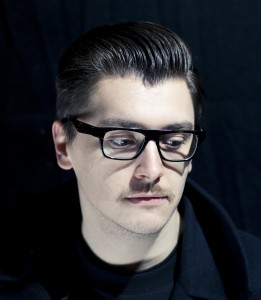 Belgian-born, Berlin-based Tim Van de Meutter alias Locked Groove may have preferred to ‘Keep It Simple’ and didn’t discover classical piano right after giving up the feeding bottle but rather at age of 11. His passion for music, however, resulted in studies of classical music and his diversity found a rich breeding ground while he was working at Antwerp’s fine record store Wally’s Groove World. After experimenting first with dubstep productions, he soon realised his vocation for house and techno which was scouted by Hotflush’s head honcho Scuba who included also Locked Groove’s ‘Drowning’ in his DJ-Kicks compilation in 2011.

We took the chance to have a chat with Locked Groove before the release of Enigma on the 10th of November. Enjoy!

Hi Tim! Can you pick three influential records from your parents’ record collection?

Belgium witnessed the emergence and the decline of a brief but intensive underground movement called New Beat between 1988 and 1989. Have you ever had interest in researching this genre? If yes, what would be your favourite record?
That’s a very tough question because there’s so much good stuff out there. I think my pick of the bunch would be an old Antwerp Classic:

It’s not really a classic new beat tune, more of a crossover between EBM & minimal synth.

What is essential for a good warm-up DJ-set?
Getting a crowd going  and not trying to ‘smash’ it is very important. Warming up is the most difficult slot in my opinion because you have to strip yourself from all echo & play in function of the rest of the night.

Can we expect a live show from Locked Groove complimentary to your DJ-sets?
Not really, I couldn’t handle the stress of a live show I think.

You founded Locked Groove Records in 2013. Do you target a specific sound aesthetic with your label and what is your release policy?
I started it to have an outlet for my own music as well as the music I like. There’s no real release policy. I just put one out when I feel like it.

Do you think that independent labels receive a fair share for their music?
That depends how you look at it. Record sales aren’t what they used to be. But I wouldn’t view that as being an every negative thing. You have to be creative and push yourself always to make the best record that you are able to at the moment.

Your upcoming release Enigma on Hotflush Recordings received support from renowned DJs. What influenced you produce this record and what makes the “Scuba Warehouse Mix” so special?
It was a weird one to make, everything happened really quickly. I didn’t really have something I wanted to make when I started the track. It just ‘happened’. As for the Scuba remix, I think it’s great that he managed to beef the entire track up and turn it into a massive main room track. It’s also pretty special because he doesn’t usually do a lot of remixes. So I was happy when he decided to take on Enigma.

You have worked in a record store during your time in Antwerp. Do you think record store will have a sustainable future?
I think so, there’s always going to be people who prefer a personal treatment rather than buying records online. So there will always be record stores I think.

How important is social media for an upcoming artist?
Very & not at all. It depends on how you approach it. You can push yourself as much as you want on social media, that doesn’t mean that will do you any good per se. But then again, sometimes it does. You can’t generalise, It really differs for each person I think.

What can we expect next?
Enigma is out on 10th of November via Hotflush and there will be a follow-up release on another label that is scheduled for the beginning of 2015.