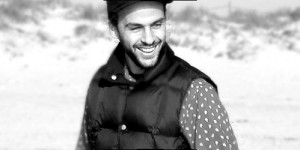 Tiago Miranda is one of Portugal’s finest crate diggers and his variety in production styles ranges from disco, house, techno, chill-out, leftfield and everything in between. His diverse discography includes releases at James Murphy’s DFA, Prins Thomas’ Internasjonal or Lovefingers’ ESP Institute amongst many others and constitutes just an indication for his eclecticism that propels his longstanding residency at Lisbon’s dance institution per se Lux since 17 years. Enjoy!

Hi Tiago! Can you describe your first contact with music and how did it influence you to embark on a musical career?
Hi! Thanks for having me. My upbringing was key to much stuff I think; I remember feeling stimulated by loud music from my parents on the weekends at home at an early age. Also my brother that actually played drums and so by watching him play I got into drumming and quickly devoted on learning the craft. Soon I was making my own band with my cousin and friends, other bands followed as did other instruments.
Music with computers started really late for me so I’m still trying to figure it out, trying always to make it more fun to myself, not a ‘kick-snare-sequence-copy-past’ thing. I miss the energy of practising though, that moment when you know well the people you are playing with and just jam. Being home alone been cool too, don’t get me wrong, but I’m in need of getting back to the communal instrumentation of things.

What motivated your shift from playing live instruments in bands to DJing?
It’s always for the love of music, right? But yes, when I moved to Lisbon, I was playing in this band where 3 of the 5 guys were DJs and then I met this girl for whom I felt in love, she was a DJ too and this in a time where being a DJ was not so popular. So If you can’t fight them, join them, right? I started DJing more professionally around 1993/4, Lux opened in 1998 and I have been playing there since then.

Based on your experience form your 17 years residency at Lux, is it true that a club’s crowd completely changes in a two years cycle and how is the challenge to adapt to it as a DJ?
Yes it’s true, crowds change, maybe not as fast as 2 years but they do come and go, sort of. All good fun. But there always been a great balance of diverse human beings at Lux over the years, some more experienced others less.

Beyond your output as Tiago, you’ve been part of diverse musical projects as krautrock vs. Detroit Techno band Gala Drop or your downtempo work under the Sea Power and Change monikers. Does this diversity reflect also your style of DJing?
Maybe. As a DJ, I do think of music as functional or non-functional to a certain crowd or floor but I only play what I feel strongly about and that could be any genre or tempo. As years gone by, I became somehow prouder of the music I play, in the sense that I really love all the stuff I bring and I hope to keep it closer to my heart as years go by, probably ending my sets crying (laughing). Will pay attention to not become boring, though.

How would you describe your 2013 debut album’s Ecstasy & Release (under the TnT Subhead moniker) sound aesthetic?
It sounds like the music I would make. It was my attempt to emulate my influences and feelings. It all comes from some sort of trance so it’s difficult to pin it down later. There’s a mathematical work to it but in a later phase, when I edit, overdub and stuff. The way it works for me is that I’ve always thought of the creative process in two moments and it’s hard for me to decide when to switch. One is the input drama where I can’t do any music and just absorb stuff, music, books, film, food, sun, silence, whatever. Then the output craze where I won’t even tie my shoes and just play, so when I get there the first recordings are coming from somewhere I haven’t fully grasped nor will I force myself to understand to be honest. And that’s for all the music I’ve done so far.

What make you want to take another path with your new album Emotional Poverty?
I was pushed by the label to try a more raw approach so I was trying not to overdub and mechanise the songs too much. Everything there is first take, with mistakes and all that goes with it. I wanted to free myself from my own emotional poverty at the time. Like a scream saluting what’s rad! (putting words into picture think of that cat as the punk gang leader on the Police Academy movie). I went the fastest I could and it felt good.

How did the collaboration with Munich’s Tambien evolve?
Pretty good. We know each other for quite a long time and I love those guys. Feels good to do something with someone you love (if sex is not possible, be creative!) and I think that they were ready to jump into unknown not giving one fuck and trusting feelings more then other stuff that pressure creates in minds of music. I think I approached them first with ideas if I’m correct.

What is your vision for your label Interzona 13?
Publish my own music, work fast, grow wilder. Like MG said recently “I am an old man, my age has nothing to do with the fun I have”, Interzona shall be my diary on that motto.

How important is social media for artists’ nowadays?
I don’t know man. Social media helps me kill time and boredom, but I still believe that life is outside and my work should speak for itself. That’s my view.

What’s next?
Enough of the sea thing, I might move to the city to look for help and help others.