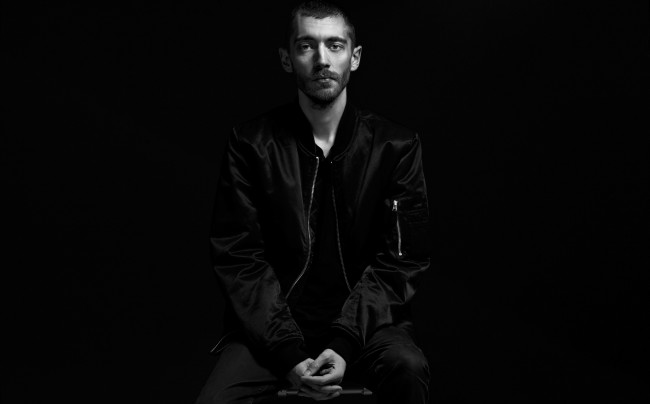 If you interpolate the cities at which Matt Karmil lived so far as London, Paris, Cologne, Berlin and Stockholm, it gives you also an indication of his upcoming sky-rocketing releases. This sounds even more like a happy coincidence if you know that the idea to release his solo project just came out at playing a Cologne Tape event, a collective of creatives from some of our favourite labels as Magazine, PNN, IRR that are all related to Cologne’s musical bastion Kompakt. ‘Reverse Peephole’ became an instant classic of our rooftop parties in late summer 2013 and still raises a smile at our faces for the upcoming summer season. Apart from Matt Karmil’s own productions, his remixing skills are sought-after as well and everyone who listened to his retouch of John Talabot and Axel Boman’s ‘Sideral’ would agree immediately. We are really looking forward to his upcoming second album on Bristol’s very own Idle Hands, so it’s time to catch him right before. Enjoy!

Hi Matt! When was your first contact with music what role did it take during your adolescence?
I started out by playing the guitar — around 13 or 14 years old — it quickly became my entire life. I would play for 10+ hours a day, studying music theory and just endlessly practising, learning everything I could. I gradually moved into being interested in electronic, then dance music. It was a total escape from the health problems that I suffered from throughout my adolescence.

Would you underline a special club where you learnt the craft of DJing, i.e. bending an arc of suspense over the night?
I played all over — I had a residency at the original Dragon Bar in Shoreditch, London, which was one of the first bars in that area, around 1999 – 2003. I played a variety of styles, and the parties would go on for hours. I guess I learned then how to move people and use records in different ways.  The type of club, if it’s smoking or non-smoking, and how immersive the sound system is are very critical to how I play, and what will work or not.

You perform both ways as a DJ and Live-Act. Do you think that you will have to decide on one way of performance?
If I’m totally honest, I think there is quite a blur between the 2 — and quite perversely, sometimes my DJ sets are more ‘live’ or at least improvised than the live show. I’ve lately taken to merging the 2, which in a way gives me the best of both worlds. I get to focus on my own music a lot, but also adapt to the situation, in terms of audience, time and physical space I find myself in.  The purism of a vinyl set has a great charm, then there are things like the CDJ2000 Nexus, which are amazing if you want to slice and modify arrangements and almost remix there and then. Three of them and I can play in the mix pretty much constantly across the night and I find that very creative — adding the octatrack into that, gives me what I feel to be as ‘live’ an experience as possible, given the way my music is constructed.

What about your studio set-up? Do you have a favourite analogue gear that you use at every production?
Tape machines! My music is very much sample-based, so I guess it’s rarely ‘analogue’ per se, but the use of tape machines is pretty much essential for me being happy in the end result.  Both, the mastering 1/2 or 1/4” machine and a fantastic machine called the Tube Tape Echo by Fulltone.  There is something about the tape that i love; it modifies sound in such an organic way, compression, eq and distortion in the perfect proportions.  The emulations these days are also very good — the gap between plugins and hardware is ever closing, but the interface of physical machines makes such a great difference to how one behaves, rather than the sound, at least in my experience.

Listening to your States EP on Yumé Records, it sounds like a logical successor of your acclaimed ‘So You Say’ EP on Tim Sweeney’s imprint. How important is it to develop a distinctive sound aesthetic that people can associate with a certain producer?
I think my music is quite varied — perhaps the difference between the ‘- – – -‘ album and ‘reverse peephole’, or ‘so you say’ being the widest space in terms of what I have released so far. I’m not sure how much that helps people identify with what I’m doing. I guess it’s not really for me to say how varied or diverse my music is — I’m just very happy to be able to realise it on vinyl and have more and more people to hear it.

You will release your second longplayer on Bristol’s Idle Hands this year. Comparing it to your debut album ‘—-‘ at Cologned-based label PNN, how did your sound/production technique develop? Is there a narrative story behind the album or is it an improvisation of your previous productions?
It was actually recorded a few years ago — a lot of the music I release was made several years before it is actually released. I sent it to Chris (Farrell, owner of Idle Hands) as we were trying to finish an E.P. and thought that he would choose one of the tracks. he in fact wrote back and asked if we could release it as it is. It’s very varied, and a very personal expression.  I hope some people like it (smiling).

What about working with vocalist?
I have a wide experience of working with vocalists, and have worked with some amazing talents over the years. For my own solo music I’m not sure if it would fit. It feels awkward to me to even have live instruments in my own music, let alone something so clearly identifiable as a voice.  However I do continue to contribute to other people’s music and I love that.

What is the challenge of the mastering process?
Not to ruin your song! In all seriousness though – I’m doing more and more mastering and mixing for other people these days. It can range from the most subtle and technical adjustments for vinyl or other formats, to delving deep as possible into the stereo mix or even stems and trying to get the maximum possible expression from the elements without compromising or taking away from the original vision.  Quite a lot of mixing and even more of the mastering is a challenge to make the music work the best in the widest possible environments – from ear buds to massive sound systems – balancing these extremes in playback systems and everything in-between is a very particular discipline and challenge that I really enjoy.

Do you think that ‘not sending out demos’ is the right path for up-and-coming producers?
I guess there are no hard and fast rules — it’s really about linking and meeting people, that are both interested to support you music from a label perspective and a consumer perspective too.

The democratisation of music has made it possible to release and get your music to an audience, and at least for me, it wasn’t a strained process to release my solo work, it just came at the right time. I had worked very hard, developed my sound and then it started to find its own home.

What’s next for Matt Karmil?
Wow — quite a lot! This year will see two releases on Idle Hands, E.P.’s on Studio Barnhus and Mule Musiq, another album on pnn and a few remixes, too. Adding to that, quite a lot of shows across Europe, including some b2b with Kornél Kovács and some collaborations, too. So: busy busy!

One response to “Sampled talk with Matt Karmil”