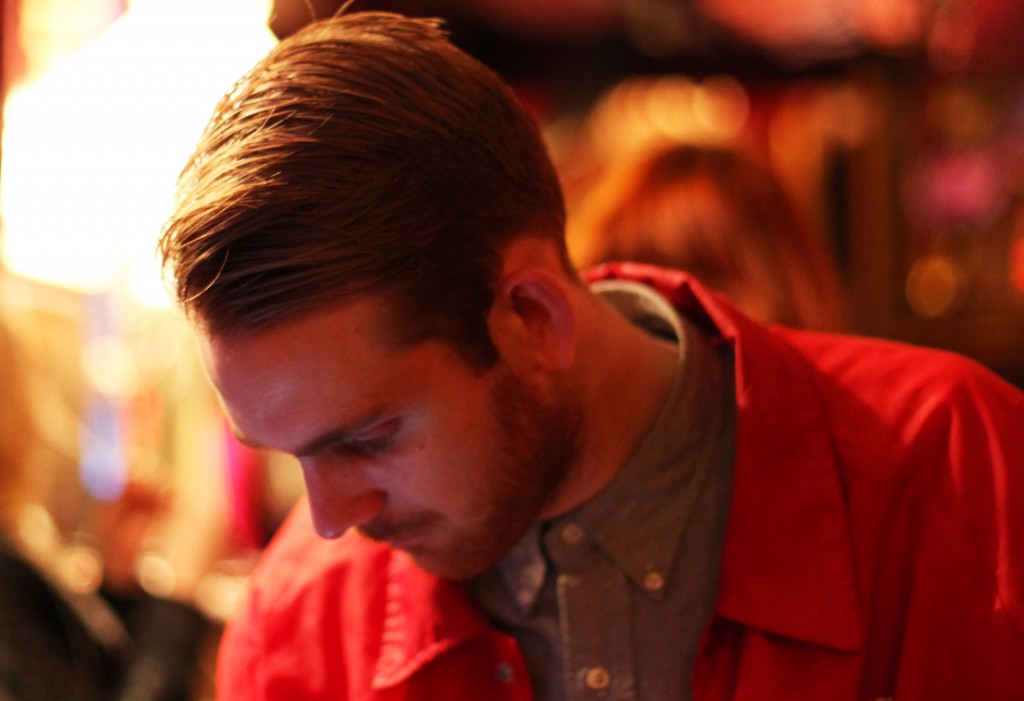 Influenced by UK Garage and drum & bass, Rob Glassett a.k.a. Fold soon embarked on his deep vision of house and techno that he manifests at solid dance floors as the ones of Berlin’s Panorama Bar, London’s The Hydra or NTS’ fine airplay.

His collaboration with Sam Fussell as Homepark caught already our eyes in 2010, with solid productions on bliq, Ornate or Chez Damier and Brawther’s exquisite Balance series. Under his solo project he is going to release soon his Mr. W00D EP that attracted already an international stir on George FitzGerald’s ManMakeMusic. Exactly the right timing for an EDHID chat. Enjoy!

Hi Rob! When was your first contact with music? Can you pick three tracks randomly from your parents’ record collection and what memories do you associate with them?
Hello! I guess listening to my parents’ mix tapes while travelling to our family holidays in Cornwall. We used to sing along to old ’60s reggae, motown, Michael Jackson and Queen tapes. Tighten up compilation volume one on Trojan records and Queen’s Box Of Flicks really stand out in my memory. I didn’t care much for the Abba Tapes.

Our nearest town growing up with decent record stores was Croydon. You had Wax, Beano’s, Swag and Big Apple all within walking distance of each other. I used to go to Blackmarket (now BM) in Soho quite a lot, too. We were so young that we had to pay our dues before the guys working there realised we were serious about the music. At the time it was all about getting the latest dubs, especially within the UK Garage and drum and bass that I was interested in. They wouldn’t just pull out white labels for any kid that walked in. It was a first come first served and everyone wanted those dubs. But when they saw you were there every weekend, week after week and that you knew your shit, you’d eventually get noticed. We had to earn our colours, something that is lacking a little in today’s dynamic, but I kind of liked it that way, that’s why it was so precious to me and my friends at the time.

Apart from your solo project as Fold, you are collaborating also with Sam Fussell as Homepark. Can you describe your production set-up? Does your solo approach to producing music differ to your take when collaborating?
I’ve known Sam for ten years now so we know each other inside out and thus leads to us being quite relaxed with our production approach. We tend to write ideas separately and then finish the ones we both enjoy together.

When I produce on my own there is only one ‘filter’ the music must pass through to reach the completion stage. We both have our own modest bedroom set-ups. We tend to finish stuff at the house where Sam grew up just south of London in Surrey where he has a few analogue synths and a valve compressor. Not to mention his parents who are always happy to accommodate/ feed us. I think it’s possible that deep down they might miss the dull thud of kick drums emanating from his vacated room.

Your released your Slime EP on George Fitzgerald’s imprint ManMakeMusic already in early 2013. How did the connection evolve?
The relationship with all the guys at MMM has evolved well because they’re just a great bunch of people. I first met with George to chat face to face about my music in an East London pub, but we just ended up talking about football rivalries and Uk Garage.

Since playing at their label nights in London and Berlin and various nights out and festivals, I consider them all good friends. It feels good to be part of something that has good, honest intentions and approach to putting out music.

Your follow-up Mr. W00D EP uses a sample of Alicia Myers ‘I Want To Thank You’. Can you describe your influences for this EP?
There’s no real influence of such, you could say it’s an amalgamation of many influences over time. Starting with hip hop producers like Premier, Pete Rock, Hitek, J-Dilla then guys like Mark E, Lucretio, Soundstream… old Guidance records, to name but a few, have always been favourite ‘samplers’ of mine, but I wouldn’t say I was channeling them as I wrote Mr W00d.

I actually wrote the track originally in 2009 at a slower BPM, around 110, as I was feeling some of the sounds coming from the nu disco and edits movement, but I never got round to completing it. I was going through some old tracks more recently when I stumbled across the loop and decided to add a different energy to my original effort.

Speaking from business perspective, using prominent samples could impede frustratingly the official release of productions. What’s your view on this?
I’m not too worried about it. Maybe I’ll have to think about it a little more if and when I start my own imprint. That said, I certainly wouldn’t want to release someone else’s track as my own. With ‘edits’ and sampling I believe it’s important to bring something new to the ‘sampled’ music. In my eyes sampling, when done well, is an art in itself especially when combined with other additional external elements.

Did your appearances at Electric Minds/The Hydra parties influence your style of DJing recently?
Not really, each gig is going to be different in it’s own way. The Hydra party was quite a big room compared to some of my recent gigs. It was definitely one of the most impressive sound systems I’ve heard for a while. Thinking about it, it was probably one of my best gigs over the last year, the room filled up as soon as the place opened and the crowd where really responsive and fun to play to, which made it a lot of fun for me!

You are hosting a monthly residency at London’s NTS radio. What is the concept of the show, i.e. is it more club-oriented or rather an eclectic selection of music?
I was really stoked to get my own slot on NTS. It’s great to be a part of such an amazing project. Femi and the team have done such a great job building the station and it’s reputation from the ground up. And now there’s so many amazing artists contributing to it.

NTS is a great platform for me to share my new and old records with the listeners, they’ve put a lot of faith into the artists. You have free reign to play whatever style of music in whatever way you like, which is really refreshing.

Personally, I normally start down tempo, with ambience, electronica or obscurities and dub techno. Building up tempo and momentum like a crescendo to the end of the set, from house to techno / UK Garage. Kind of like a warm up set I guess, but with no cap on how far I push on in the latter stages of the set.

How important is social media and video for promotion nowadays?
Social media is a bit of a paradox for me. On the one hand, it is very important tool for a lot of people in this industry, including me. At the same time, I find it a very frustrating and saddening experience. The most positive thing for me is the ability to be able to interact with people that enjoy my output and get feedback after playing out. It is really nice when people reach out to you. It’s quite a struggle for me to work on music as I’m in full-time employment at the moment. It makes all the difference when people give you encouragement like that.

What is next for Fold?
For now I’m concentrating on finishing my new batch of tracks and finding the right suitors for them. I also have another record as Homepark in the pipeline that both myself and Sam are very happy with and keen to share with you.