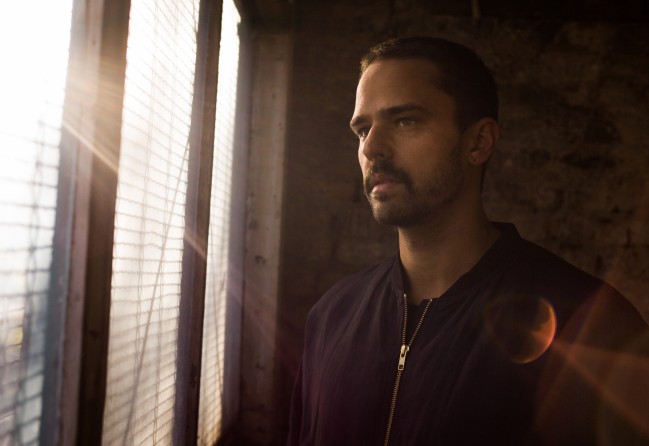 Mannheim’s groove bastion 8bit Records celebrates its 10th anniversary this year with a stronger than ever pipeline. Exactly the right timing for us to catch label co-founder and Trust captain Nick Curly, who will join Tangun’s RAW Sound System at Kloster on Friday, 6th February 2015. Enjoy our EDHID chat!

Hi Nick! When was your first contact with music what role did it take during your adolescence?
Hi! I started taking piano lessons at the age of nine and continued for about 10 or 11 years. Music always played an important role for me but it was rather a hobby that accompanied me constantly. I started going out as a teenager and one of the first spots was a club called Vibrations. Around that time, I began also buying records from local stores like Delirium, Humpty or even from some drugstores that sold records back then (smiling).

How did your DJing evolve?
My first DJ gig was at club Vibrations because the owner of the club listened to one of my early mixed tapes and asked me to play. After finishing my school, I met Johnny (editor’s note: Johnny D) at my first job and later Ray (editor’s note: Ray Okpara) as well. Each of us had a different background, Ray was working at hip hop fashion shop, Johnny came from a drum & bass angle, which was very popular in Mannheim back then, and myself having more a house and techno background. Based on this constellation, we started to organise our own free-style RAJO parties with an overwhelming success in the early ‘00s. Retrospectively speaking, I think the reason behind success was that we achieved to attract a musically heterogeneous crowd and arouse a common enthusiasm for electronic music.

Would you pick a special residency at which you learnt the craft of DJing, i.e. bending an arc of suspense over the night?
Based on the success of the RAJO parties in Mannheim, Ludwigshafen-based club Loft offered us to have our own night there. After a while, the former owner of club Vibrations took over the management of club Loft and I became one of the first resident DJs. It’s also Loft, where I started to play all-night long sets and guide the audience through a musical journey of electronic sounds. I just don’t want to limit myself exclusively on house or techno; both are essential for me.

Tool-oriented, functional grooving tracks of you, Johnny D, SiS, Ray Okpara, Markus Fix and Robert Dietz were described commonly as The Sound of Mannheim. Did you use certain equipment to emulate the typical DJ Sneak sound?
The overwhelming success of our parties and labels like Oslo, Cécille and 8bit created an international stir amongst media, which eventually tried to pigeonhole our sound. However, we never aimed to sound like DJ Sneak or whoever but rather tried to create our own sound based on our influences from Frankfurt’s techno or Stuttgart’s house scene. Similar to Mannheim’s geographic positioning, both house and techno played an important role for us and we just felt confident to create our own musical path between both.

What about your production set-up within Mannheim’s Pop Academy? Does it offer any collaboration opportunities?
My 8bit label and production partner Gorge has an extensive knowledge in producing music and I’m very happy that we are teaming-up for our common vision with 8bit since 2005. Speaking about our set-up, we rented a complete studio complex within the Academy that we share with other musicians. Actually, we haven’t collaborated with students from the Academy so far.

You released your debut album Between The Lines in 2012, at which you worked also with live musicians. Do you think it’s time again for another album?
My debut album was special for me since I preferred a concept long-player against a compilation of club tracks. I collaborated with a bass player and other musician friends to record almost everything live, i.e. bass lines, vocals and anything in-between at professional studios. I don’t plan an imminent album release and prefer to focus on 8bit at the moment.

After your Party Animals mix CD for Cocoon in 2010, you compiled a mix compilation for Defected’s In The House series recently. How difficult is it to compile a physical piece in times of online podcasts?
I don’t listen to DJ sets during the week. My idea behind compiling a mix, that is intended for car or home listening, was not to include peak time tracks. For me personally, queuing club stompers in a row misses the target, i.e. providing the listener an acoustic enjoyment. It’s not about ecstasiating a dance floor. Hence, I tried to contribute my musical diversity and emulate the broad spectrum of programming a warm-up set.

What about your party concept Trust? Is this a new trend?
I just wanted to start something new and involve my DJ friends in an interesting concept. We started at BPM 2014 and it rapidly evolved into a successful concept with worldwide shows. I’m very optimistic about our 2015 schedule that involves curating own festival stages, our almost sold-out Off-Sonar party, our residency at The Egg in London and many more. Watch this space for further details.

How important is social media and video for music promotion nowadays?
Social media is quite important and I prefer not to play-act and just to be authentic. It’s interesting that a fan page, which is actually intended to inform your following about your music, represents an insight or participation at the artist’s private life. This is at least how I interpret the like counts of the respective posts.

What’s next for Nick Curly?
We are full-force behind our Trust concept that will involve some big names of the international DJ circuit. We are celebrating 8bit’s 10th anniversary this year and we just released a new Johnny D EP, launched a podcast series and have a strong pipeline of releases by Markus Homm & Mihai Popoviciu with a Joris Voorn edit and many more. I am also about to finish my new EP for 8bit, which will likely be released mid of 2015. Stay tuned for us!

Nick Curly and 8bit on Soundcloud