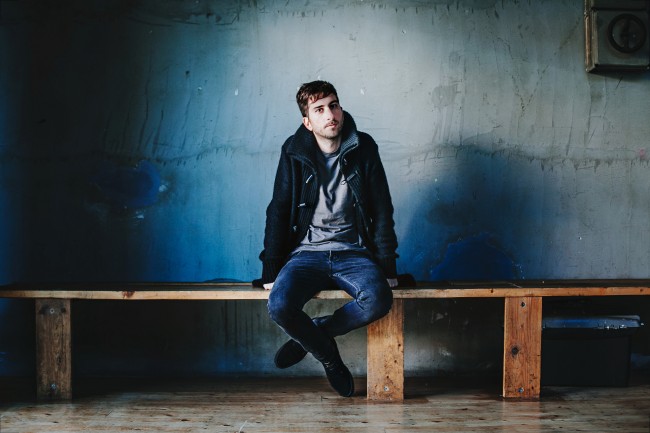 Our Thessaloniki favourite Petros Manganaris alias Echonomist succeeds the balancing act of being creative and productive at the same time for a while. His Hysteria EP featuring South African Black Soda is still on heavy rotation at the decks of the international DJ elite and seduces dance floors worldwide with a deep bassline and hypnotic vocals. Apart from his sought-after DJ skills, his live performances provide a charming fusion of minimal techno and stripped-down house. Echonomist just released his Dangerous EP on Alex Niggemann’s Aeon Records, so it’s time for an EDHID chat.

Hi Petros! When was your first contact with music what role did it take during your adolescence?
Music has always played an important role of my daily life and this since the early days of my adolescence! I had a school teacher in my house from the age of 10. As a producer, my first contact was with my band “ινφο”. We were producing trip hop, ambient, drum & bass, electronica by using synthesizers and live instruments. We released three albums and a lot of tracks and remixes for different compilations.

Was there an influential record store, radio show or club that motivated you to start producing electronic music?
Actually it was a Greek electronic band called Stereo Nova which made me think of myself as a producer of electronic music. They were releasing music mostly in Greece around 1993.

Comparing your solo project Echonomist with your previous membership of electro-pop band ‘ινφο’, do you think that producing on your own with all its liberties benefits your creative process or would you like to collaborate more?
I like both ways of producing. When you produce on your own you have your liberty but when you create something with another person, it takes you sometimes to a path that you wouldn’t take on your own. I like to see different perspectives and watch other’s people workflow.

When did you start DJing? Did a special spot shape your style of DJing?
I started DJing from my early student years but I wasn’t playing electronic music. I was more a British style indie/alternative pop DJ! Playing mostly bands like Pulp, Suede, The Smiths etc. Then I started buying vinyl and making my first steps with beat matching records. It was Elvis Bar in Thessaloniki that shaped my style but also my personal exploration through different styles of electronic dance music.

What about your studio equipment? Do you have a favourite analogue gear that you use at every production?
I think that I use Roland Alpha Juno the most, sometimes for strings, sometimes for the chords or the bass. I like its warmth analogue sound. My AKAI MPC3000 started to take a bigger role in my productions recently, mostly for the drum parts.

Your Hysteria EP on Rotary Cocktail created an international stir amongst the DJ elite. What influenced you for this EP?
This EP was made 2 or 3 days after I came back from the Off Sonar week in 2014! It’s no doubt that it’s heavily influenced by my favourite producer Carl Craig. Black Soda’s vocals were a big inspiration for me also. I was so happy when I discovered her profile at Soundcloud.

You will release your Dangerous EP on Alex Niggemann’s Aeon Records soon. How did the connection with Niggemann and vocalist Lazarus Man evolve?
Actually it’s already out! I met Alex when we did a gig together in Vienna and since then we met several times in Berlin and at also my hometown, Thessaloniki. I also released first at his label Soufooled imprint and now at AEON.
The connection with Lazarus Man was made via Twitter! I started followed him and he followed back saying that he would love to make something with me, so i sent to him the track and he sent me back the vocals.

You host your own radio show Cosmic Tones at Greek station Republic 100.3. Do you think that FM band radio will become obsolete in times of streaming services?
It’s like the discussion about vinyl and digital releases (smiling).
I mean there will be a lot of internet radios but you still feel more respected when you are doing a show at FM band radio.

How important is social media and video for music promotion nowadays?
I think that nowadays the most important thing for a DJ, a musician or a band is how good he is (or the service that takes care of his accounts) in creating data for his social profiles. There’s no doubt that social media and associated streaming services have changed people’s way to discover and enjoy music as well as how the music industry discovers, promotes and fosters both new and old musicians alike. If there’s one thing that’s clear in this new world, it’s that things are changing rapidly, and they’ll only continue to do so.

What’s next for Echonomist?
On April it will be my debut EP on Supernova’s Lapsus Music. Also some new remixes I did for Dubaptism, Dreamachinery, Junior Pappa and Plasteline Records will come out the next months.

Echonomist’s Dangerous EP is out via Aeon Records since the 23rd of February.