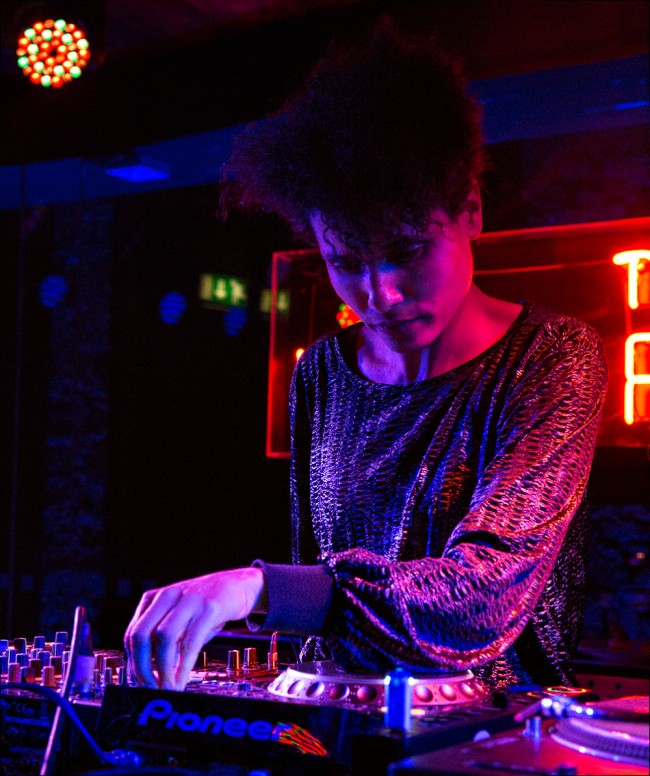 With her releases on Human Level and Huntleys+Palmers,  Hermione Frank alias rRoxymore ranks top at our watch list. Everybody who watched her live performances may confirm that her style stands out with genuine personality that we miss at times of mass releases. rRoxymore contributed also to the Decon/Recon #1 project, at which a group of musicians re-create something new out of the music stems of each other. We expect more outstanding stuff to come, so it’s time for an EDHID chat.

Hi Hermione!When was your first contact with music what role did it take during your adolescence?
Alaaaa! I grew up in a house with music lovers. My dad was obsessed with music, mostly jazz, and he had a tape recorder, which he used to record cassettes for me. Later during my teen years, I started to listen to electronic music because of my friends and we started going to raves. Also trip-hop was something that I was really into it.

Would you underline a special club at which you learnt the craft of DJing, i.e. bending an arc of suspense over the night?
I start DJing in Montpellier, where I was also part of a DJ collective. So we were throwing parties at different places.

Comparing your DJing and live performances, do both have a common sound aesthetic?
Djing and playing Live are of course two different excercises, which I enjoy both equally. But I guess the common point is that I like to surprise, in both cases. And maybe also use organic sounds in my selections of tracks and in my productions.

What about your studio set-up? Do you have a favourite analogue gear that you use at every production?
It’s a basic set-up. A pair of good monitors, analog mixer and off course my all-time companion is my computer. Speaking about hardware, I use a G2 Nord Modular keyboard among other nice stuff that I can luckily borrow from time to time.

When and how did you discover/decide to use your voice as an instrument rather than deploying it for pop-influenced vocal productions?
Actually when I started producing, I tried different things like testing the mic through various effects. It’s the easiest and the results are great. I also had the chance to collaborate with a band called Ekova, where the singer never used any lyrics, she was inspired by jazz singers, so that approach kind of inspired me to do the same. Is just voice improvisation over sounds.

Do you think it’s time for a long-player? What is your personal challenge regarding an album?
My personal opinion is that releasing a LP is a bit obsolete. Right now the music is going so fast, you end up only listening to tracks, or even mixes are more heard. Furthermore, the consumption of music changed over time, an album requires so much work but earns a little recognition nowadays. Hence, I would rather prefer to do EPs or singles. I’m right now finishing an EP and will start another project soon.

You’ve been part of a four-strong production crew teaming up for the Decon Recon #1 release on Paula Temple’s new imprint Noise Manifesto. How did the teamwork together with Oni Ayhun, Planningtorock and Jaguar Woman work out and was it tempting to include additional productions during the reconstruction phase?
The production phase was easy, we shared our sounds and we worked separately, listened to each other’s work and giving feedbacks. We also started recently to rehearsing for the live shows in the upcoming weeks, and it’s been easy so far, because we are friends sharing the same studios. All this is pretty organic.

Electronic music is booming over the last years and the demand for stage performances increases constantly with new festivals. Do you think that this overall hype benefits also more underground artists like you that stand out with an authentic style that may be less accessible for the public?
A very few music festivals take the risk to book underground artists. Most of the time the programming is more about the hype and also electronic music is getting more formated because it became mainstream over the last 10 years. So I don’t think any underground artists can really benefit from that, in whatever genre. Today it’s not about the music or how special or underground, or talented, it’s more about how many likes and followers you have in your social media.

How important is social media and video for music promotion nowadays?
My answer before I think speaks by itself. But on the other side, you are able to share more directly with people who are interested in your work. You get more communication channels to be discovered in the world and also to discover new music. I guess it is an interesting tool, but should not be a slave of it.

What’s next for rRoxymore?
Next month Im going to Pakistan for a residency in partnership with the Goethe Institute. I’ll spend two weeks working in Karachi with local musicians and invited artists. Im pretty excited about this project. I have some up coming gigs, also with ‘Decon Recon #1’. My new EP should come out after the summer. Some more projects are in the air, but I can’t say much about it right now (smiling).