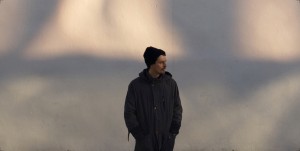 Creating the right atmosphere is essential for Martin Enke alias Lake People, so it doesn’t surprise that he prefers to play on his strength to create an arc of suspense with melancholic melodies that drive the audience relentlessly to his gently deep interpretation of house. After his release debut on Kollektiv Turmstraße’s Musik Gewinnt Freude imprint in 2011, it was his Point EP in particular that fortified the typical Lake People sound. His debut album Purposely Uncertain Field will be released through Munich’s Permanent Vacation on the 6th of February and spotlights the fact that it’s Point Of Time for an EDHID chat.

Hi Martin! Can you describe your first contact with electronic music and how did it influence you to start producing ?
Hi! Back in the days in the mid-’90s, when I was a child, everybody had tapes, recorded from some rare radio shows here and then and exchanged them with friends to copy. So this was the first contact with electronic music, but I don’t even know anymore, how it like sounded exactly. I think it was kind of Jungle-Rave-Techno-ish stuff, not bad though. But maybe the fact I don’t remember these tapes so well is because that I discovered later a radio channel called Evosonic Radio from Cologne, which aired the finest electronic music imaginable in all types of genres 24/7. So I could record and compile my own tapes and had eventually countless of them with awesome electronic music. Unfortunately, at some point the radio channel was shut down. So I continued my search for new music in record stores and the Internet. Either way, my high interest in electronic music was there and so came one to another. Besides collecting, I wanted to play with music, so I bought turntables and I started producing later as well. So actually the natural progression.

Was there a special club, radio show or record store that propelled your shift towards house and techno after your move to Leipzig?
Actually no, at least I wasn’t interested in it. During this time, I listened more to bands something that I haven’t really done before. So, there was a new world to discover. But after a few years I got very interested in electronic music and partys again. What Leipzig did arouse, was my interest in house and deep house via numerous parties at a location called Conne Island and the local record store/label KANN Records.

What is the most challenging thing about playing live for you ?
To stay happy with it, which is why you really need to think about how you prepare your set. It can’t be too simple with less action and spontaneity, but shouldn’t be also too complex that you have to think thoroughly all the time, which actually limits spontaneity. For example, I can’t work with layers while playing live. For me personally, I need everything accessible in every moment, otherwise I have to think already about my gear and thinking like this totally blocks my musical spontaneity.

Do breaks of touring benefit your creative process or does these experiences motivate you even more?
Neither the one nor the other. I don’t need vacation to motivate or inspire me. I just enjoy travelling very much, and when I’m back I start producing again. If I get bored on a tour of enjoying the nature or something, I could just start drafting ideas for new tracks on a laptop, recoding something with a field-recorder or what ever. But honestly, that never happened so far. Maybe it will, when I’ll fly to Australia for the tenth time, but not really earlier I think. I love travelling, so why using that time for something what I can do at home? However, if I travel only short trips within Europe or especially Germany, I work very often on some tracks, while waiting on the airport or sitting in a train. But then mostly I work on arrangements, finding a final idea or an element.

How would you describe your debut album’s Purposely Uncertain Field sound aesthetic?
It’s influenced from many things, which could be even only a single track or a pattern. However speaking in terms of comprehensive styles, it definitely includes some techno, electro and ’90s ambient/electronica.

Could you imagine starting scoring projects?
Not really, I don’t think I could make music to a movie. Probably, I couldn’t even enjoy it. An important thing for me during the process of making music would just disappear.  I just love the fact to start from scratch without knowing what’s going to happen. This kind of drives me to stay on a track to discover all the little accidents and spontaneous decisions which build up the entire track in the end. With scoring you have to find exactly the right intensity of everything to match with the scene. That’s a high art for sure, but it’s maybe a bit too calculated for me. Actually this is really weird, if the composer knows kind of the mathematical exact thing to do, to make you cry. Strange imagination. In fact, I really enjoy movies without music or only some ambience much more. Just a good story and smart and well-played dialogues, and I’m perfectly entertained.
George Lucas said once, that the music sometimes has a bigger impact on the audience than the movie itself. He kind of honoured music with that. But for me, that’s actually a failure, when this happens. Why watching a movie then? But I think the quote is from the ’80s. So, different times of course.

Are any videos planned for single releases?
Videos? No. That’s not important to me. I would probably find it pretty hard to choose a visual theme for a track.

Compared to DJing, do you think creating a special atmosphere, as a live act is more difficult because people tend to stare more?
No, I don’t think so. People also stare on DJs a lot.

How important is social media for upcoming artists?
It helps a lot of course. I mean you can kind of advertise your stuff all the time for free and reach people very directly. But finally, it’s all about the music. If it’s good you don’t need the internet, and if it’s bad the Internet can’t really help you neither. Beside that, there is (unfortunately) also always a little portion of luck you need.

Do you think that clubs pay enough attention to sound quality?
Depends on the clubs. Mostly yes I think, but sometimes they just don’t know better. In well-known, very professional clubs it’s most of the time very good. If not, the disappointing is much bigger, of course. But PA systems definitely became very high standard over the last ten years. People get more and more used to high quality sound. So maybe it’s actually going to be better than worse. Sometimes it’s also more about the acoustic then the sound system. And in this field there is even more lack of knowledge.

What’s next?
A remix EP follows after the album and probably a new Lake People EP. Presumably in the third quarter of 2015 at earliest though. Also some remix duties for sure. Besides that, there is also some new material coming under my other and more house focused project called ‘Llewellyn’. Firstly, one track on a double 12inch with various artists on KANN records and later on also an entire EP, but the exact timing and label will be announced at the right timing.

Lake People’s Purposely Uncertain Fields is out via Permanent Vacation on the 6th of February.