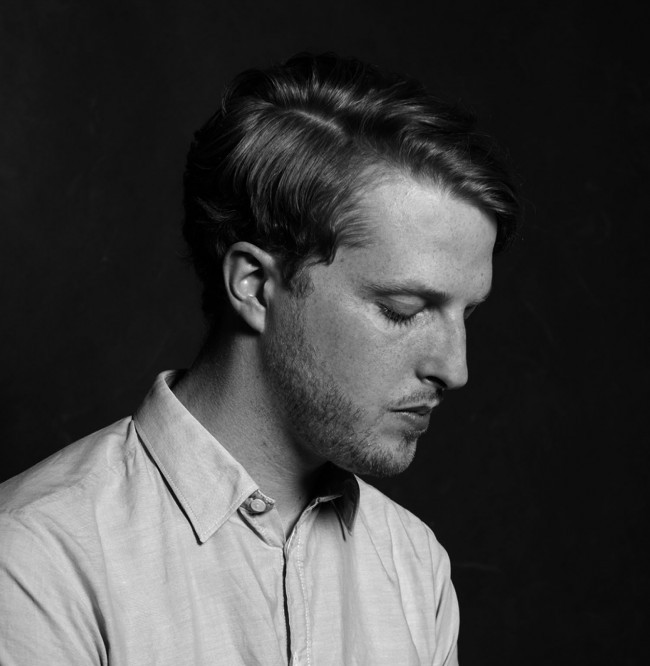 Johannes Paluka alias Iron Curtis’ talent behind decks provides an accurate indication of his omnipresent focus on the groove. Releasing music under various pseudonyms since the late ’00s, his debut album Soft Wide Waist Band came out on Tensnake’s Mirau imprint in 2012. Apart from his solo projects, we are big fans of his collaboration under the moniker Achterbahn D’Amour that released it‘s first longplayer Odd Momemts on L.A.-based Absurd Recordings’ slow-jacking Acid Test series last year; also followed by an excellent remix EP. This man is on fire, so it’s time for an EDHID Chat with Iron Curtis.

Hi Johannes! When was your first contact with music what role did it take during your adolescence?
Even though both of my parents did not play an instrument, music was always present in my family nevertheless. Early memories I have about sitting in the back of my dad’s car with my baby brother and me singing along to mixtapes my dad had compiled for longer road trips. So, imagine me and my brother trying to catch the lyrics of Peter Gabriel, Bill Withers or Teddy Pendergrass songs. During my teen years, music became more and more important as I discovered radio shows, music television, record shops and finally DJing.

If you have to select three acid tracks randomly which records would they be and what memories do you associate with them?

This is an essential classic for me, even though not a ‘typical’ acid house record. Byron Stingly’s vocals with these dramatic strings will always get me. I guess I heard this for the first time in an old Hardy mixtape somewhere on the interwebs. This record may have torn down so many cubs – and it still does.

Laurent Garnier, Ludovic Navarre and Shazz teamed up for this epic acid techno record back then in 1993. It is warm and soothing yet edgy and impelling. This record in particular, as well as Larry Heard’s and Underground Resistance take on house and techno, opened a new musical world for me: one that combines beautiful melodies with harsh techno sounds.

Could I extend this list to at least 30 tracks please? Playhouse was one of the most influential German record labels for me in the early and mid 2000s. I have to include this track as it so summarizes what I liked best about the imprint: same as with the Ragtyme track, this is definitely not a typical acid track. But when the acid-not-acid sound kicks in after c. 2 minutes, there is no way back (to quote Adonis).

Would you underline a special club at which you learnt the craft of DJing, i.e. bending an arc of suspense over the night?
I need to mention Desi & Zentralcafé here. Both venues — located in Nurnberg, my hometown — where places I literally grew up in terms of club culture and DJing. In particular the Lead with the Bass and Musikverein parties had a huge influence on me. After moving to Berlin, it were clubs like Tape, Horst and About Blank that influenced me and so shaped my DJing, too.

Comparing your DJing and live performances, do both have a common sound aesthetic?
I’d say so, I have. Even though it is pretty hard for me to describe it. As I ‘learned’ DJing in the aforementioned venues in Nurnberg, I tend to still play eclectic DJ sets if possible (in the wide range of house and techno of course). My favourite DJs master the art of ‘story telling’. So it became one of my main aim as a DJ, too. This would mean to not only combine tracks which make sense to play after each other but to also to create a bigger picture during a night. This may sound pathetic, but if you like to play out disco, electro, deep and not so deep house, techno and what so ever from the past and present, a sort of ‘storyline’ is mandatory as otherwise the whole thing will end up to be a total mess. However, playing such sets is only possible if the crowd is into it. Sometimes though, playing a straightforward set can be as much fun as trying out various styles. Regarding live performances, I could only work with my own material of course. Nevertheless, I’d say, the records I release and so the music I would play out live does reflect a broader range, too.

What about your studio set-up? Do you have a favourite analogue gear that you use at every production?
It is the Roland TR 606. An essential piece of gear not only for the Achterbahn D’Amour productions but also for my solo works. The sounds of this drum machine can only be modified regarding their volume and accent. However, using outboard or software effects with these sounds bring them to live anytime I would use in a track. If there were a sound I could listen to over and over again without getting bored/annoyed, it would be the 606’s hi-hats.

After several EPs on Acid Test, your collaboration project Achterbahn D’Amour released your debut album Odd Movements on Acid Test, a sub label of LA-based Absurd Recording. What made you feel that the timing is right for a long-player and what sound aesthetic did you aim for?
It might be easier for me to describe what we did not try to do: a stereotype acid house/techno record. This would have been impossible anyways, as the both of us, me and my production partner and friend Jool brought in so many different influences and ideas when working on the album. All in all, we tried to avoid a cliché-formula of acid house and techno but to create a rough and brave take on electronic music while using a limited set-up of hard- and software.

You just contributed a remix to Tassilo Vanhöfen’s Acrobatic EP recently. Speaking about remix duties, do you think that some tracks can’t be remixed?
Luckily, I have not been in the position to receive a remix request for a track that I would have considered to be ‘un-remixable’. However, I have to admit that it is easier for me to get inspired when listening to the original’s single parts instead of the original itself. For instance, if I think the used elements and sounds could be twisted and reworked in a way to get an ‘Iron Curtis’ take out of it, i’d be highly motivated straightaway; even if the original track will not 100% fit my taste. Speaking of Tassilo’s track, I had no doubt that I would be able to deliver a remix in the first place. However, it took me several attempts and versions to get it done. But I would need to continue working on a mix until THE very version is finished. Remixing is tough though, but I love it.

Do you prefer the creative process of working alone or would you like to do more collaboration in future?
Working alone is something I’m so used to. It is this weird cocktail of musical meditation, fear, hubris, confidence, routine, sudden ecstatic moments and deep satisfaction which I can handle the best with only myself in the room. Moreover, it took me several years to even let someone else step into my ‘comfort zone’ to work with me on music. This all may sound slightly autistic, however, to put it straight, working together with someone I like personally and who knows me well is so important to me. A random collaboration just because I would like the others’ music was never an option for me. Ever since I started working with friends, I don’t want to miss it anymore. Just recently, I’ve been in the studio with long-time friends Yanneck (Quarion) and Johannes Albert independently of one another and we had some pretty inspiring sessions!

How important is social media and video for music promotion nowadays?
I truly benefitted from Myspace back then — the very first social network I was active in as Iron Curtis. Without Myspace itself and in particular the anonymity that the profiles allowed me to have, I might not have been able to spread my music and attracting the interest in my tracks so easily. These days, I do consider social media as part of a ‘work-related’ process: It’s still fun and of course the feedback I would receive from fans and friends is highly motivating. However, it is hard work to keep that thing going.

What’s next for Iron Curtis?
My latest release (The K.M.S. Years) on Baaz’ Office Recordings just got released. And as mentioned earlier, I teamed up with mate Johannes Albert and our first release as Moon is soon to be released via Frank Music. Besides that, more solo stuff is seeing the light of day anytime soon and two great projects scheduled with Achterbahn D’Amour for Acid Test are in the making. So all over: busy times ahead!